Kinda familiar – what Americans do for advertising 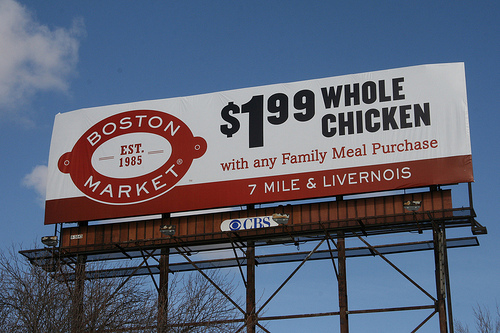 My wife Meg and I are just back from Massachusetts, our annual visit to our two daughters who’ve lived there a while now. Much of the time we just chill (you need to – up to 100ºF some days) and have fun, maybe go to a beach, so any advertising coming my way is all consumer, and for the most part, local.

Local in America is of course a lot wider than here in the UK – it’s not such a big deal to drive a couple of hours for something, even an evening out. Turn on the radio and there are folks advertising car dealerships, fresh fish outlets and home supplies to the whole of the south of the State…

The same thing happened the few times we turned on the TV (for our son-in-law to show me the Redsox’ current failings at baseball, or how the Bruins were cracking on in ice hockey).

“Hi, I’m Jerry Bloggins, and here at Newtown Chrysler we’ve been giving folks the best deals in new cars for over 15 years….”. After a couple of appearances, Jerry and his team are old friends to me, and if I ever want a new car, I’ll be sure to drive over and see him.

There’s a relaxed familiarity to much of TV and radio advertising, so when any of the Japanese car makers sponsor a sports programme, for example, the contrast is almost disconcerting. The wordless propulsion of sleek steel and the closing special effects look more like a mid-section from a Hollywood production with the sound turned down.

Posters are different again – still some ‘local equals regional’ content but nothing too clever, just what and where, plus quite a bit of corporate advertising, professional services and the like. But of course all the more visible and seen time and again as you cruise along yet another otherwise uncluttered freeway on the few miles to the next town.

Does it work? I don’t have their data, but I can see it, yes – particularly radio advertising. You just turn on your device and there you have it – even in the middle of nowhere, you can find two or three rock stations to rival the one UK station that might cut it for you, and for that you have to go digital. But that’s a whole other story…

This entry was posted in townhouse. Bookmark the permalink.